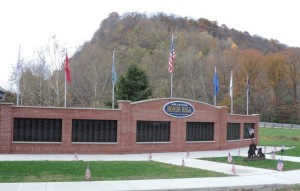 As fervent supporters of our communities, the men and women of the OH-KY ADC regularly take on projects that hold a deeper meaning for themselves and their fellow citizens.

One of BAC Local 10‘s community activities was helping to construct the Wellsville Honor Roll Wall to recognize the citizens of the city who have served and are currently serving our country.

The Honor Wall holds six 8’x4′ black granite panels engraved with the names of these brave men and women who served in the military from World War I to the present. The Wall is 66 feet long and 12 feet high at its center.

The George Crews Construction Company credited Local 10 President Donald Mays spreading the word among Local 10 and other area trade unions, who generously volunteered many hours and resources to the project. Local 10 retiree Dale Mays devoted considerable time to the project during the peak work season.

The Wall can be found on Wells Avenue at State Route 45, just west of the state Route 7 overpass in Wellsville. It was constructed as a replacement for Wellsville’s original Honor Roll, built in 1943, which stood next to the old Wellsville City Hall, current site of the Shoub Towers apartment building on Main Street.

There are currently 2,200 names on the wall, and the community is raising funds to expand the project.